The way we consume news is evolving. More than ever, we’re using digital devices to scan daily headlines or read more in-depth pieces from our favourite writers. The popularity of mobile news is undeniable, but what impact is it having on other news sources?

The way we consume news is evolving. More than ever, we’re using digital devices to scan daily headlines or read more in-depth pieces from our favorite writers.

The popularity of mobile news is undeniable, but what impact is it having on other news sources?

This content has been produced in association with Stack.

In an age of digital disruption, the news industry is no exception. Recent updates from Facebook and Apple clearly indicate their intention to compete with traditional news sources, aiming to become the go-to source of news for young, tech-savvy consumers. Both have rolled out updates to their news functions, helping publishers deliver content to users more quickly and efficiently.

So how are modern consumers accessing their news? A recent survey conducted by Pew Research Centre sought to investigate the trends of news consumption in the digital realm. The resulting report revealed that the popularity of print is waning, with just two in 10 adults getting their news from print newspapers.

In contrast, digital news consumption is on the up, with mobile fast becoming the device of choice – of survey respondents who said they get news on both desktop and mobile, 56% said they preferred mobile when accessing news.

While some of the biggest newspaper brands have successfully managed to recreate their audiences online, it seems consumers are shifting their focus away from direct news sources and towards social media and news aggregators; where it’s easy to instantly explore content from several different sources.

Recently-launched content aggregator Stack, which uses machine learning algorithms to surface and suggest relevant stories based on your reading activity within the app, gave us an insight into some of the key behaviors of their users.

Their statistics show that the average user consumes around six articles a day, and is most likely to do so between the hours of 7-9am.

It seems that the hours just before consumers begin their working days is the most popular time for mobile news consumption. Whether it’s quickly scanning the headlines whilst still waking up, or finding a good article to read with that first cup of coffee, mobile phones are often the first source of key developments in the news.

Data from a recent survey on digital news conducted by the Reuters Institute for the Study of Journalism supports this assertion. It revealed that almost 20% of people said that a smartphone device is the first way they ‘typically come across news in the morning’. 15% of those surveyed said an aggregator was their first contact with news while ‘social’ was the largest smartphone source with 48%.

It seems that rather than sit down with a newspaper at breakfast as we once would, we are now using our smartphones to access content from a range of sources on an even wider range of topics. On top of this, the content is often being recommended to us by friends or by algorithms, as is the case with social platforms and aggregators. News consumers also seem to have shorter attention spans when it comes to reading articles on their smartphones. Further figures released by Stack relate to the length of time users typically spend reading articles. They have found that the average time spent within an article on Stack is just 57 seconds.

Smaller screen sizes, coupled with ‘mobile multitasking’, means that readers often spend less time reading articles in full on their phones, choosing instead to open articles, scan the key points and evaluate whether it’s worth reading in full. Stack’s data reveals a distinction between these ‘quick scans’ and ‘deep reads’, they found that of the six articles users typically read in a day, four of those are quick scans lasting under 15 seconds and two are full reads usually lasting between 5-10 minutes. 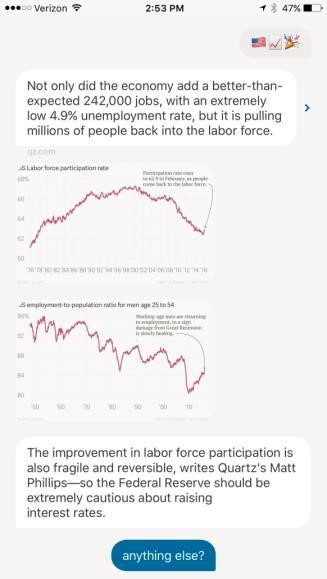 While long-from reading is still popular on mobile devices, news apps are increasingly presenting stories in shorter, snappier formats to keep their audience more engaged. One example of this is the Quartz news app (right) which breaks down news stories into more digestible chunks and presents these snippets of information to the reader in the form of a text message conversation.

It is clear that as the news media continues its transition to mobile, data on consumer reading habits will become even more valuable to the brands vying for our attention. In an era of email, instant messaging, Facebook and Twitter, mobile audiences are becoming increasingly lazy when it comes to searching out and consuming the news they read.

The modern reader not only requires tailored recommendations but content that is light, easy to consume, and even easier to dip in and out of.

This content has been produced in association with Stack. Click here to read our collaborative content guidelines. Views and opinions expressed in this article do not necessarily reflect those of ClickZ.

Brands as publishers: What makes Casper, Airbnb an...

People would rather learn about a brand through content than ads. Creating their own publications, Airbnb, Barneys and Casper take that and run with i...

View article
Five news aggregator apps to watch out for

Content Marketing Five news aggregator apps to watch out for

Five news aggregator apps to watch out for

For the publishing industry, 2016 saw the rise of news aggregators – mobile-friendly apps able to deliver personalized, ultra-relevant content from mu...

Check out the shocking way this agency is trying t...

Few digital terms are as dirty as clickbait. It's the scourge of the web, and Facebook recently announced a News Feed update aimed at reducing the pre...

View article
What content lengths work online, and which do people trust?

What content lengths work online, and which do peo...

There is of course a lot of discussion about content and what does and doesn't work online. Is long-form the key? Does short-form content have a role ...

What can Medium's Creative Exchange bring to nativ...

Last week, social publishing company Medium announced the launch of a programme that will allow its writers to partner with brands to create dedicated...

View article
The changing role of the CMO: from brand builder to business disruptor

Asia The changing role of the CMO: from brand builder to business disruptor

The changing role of the CMO: from brand builder t...

Maneesh Sah, head of marketing Asia Pacific, Middle East and Africa at Aon Hewitt, says marketing in the digital age is having a credibility crisis. R...