A new study from Origami Logic highlights how much marketers struggle with cross-channel measurement. How can they make data less overwhelming?

A new study from Origami Logic highlights how much marketers struggle with cross-channel measurement. How can they make data less overwhelming?

In today’ digital world, there are endless possibilities for marketers. However, that variety is a double-edged sword, as the lack of limits makes it difficult to measure marketing efforts across channels.

According to new research from Origami Logic, which released its Exploring the Keys to Successful Marketing Measurement and Optimization report this morning, 61 percent of marketers don’t think their measurement methods are effective. More than half consider their biggest challenge to be having too many systems that capture and measure signals. Close to 40 percent also struggle with being able to take action based on the results, as well as how long it takes to get those results. For Kohki Yamaguchi, head of product marketing at Origami Logic, those issues all stem from the same place: being overwhelmed.

Part of it comes from measuring signals – including impressions, conversions, CTR, ROI and cost-per engagement- too infrequently. Only 16 percent of the survey’s respondents look at their cross-channel measurements on a daily basis. The largest group – 23.2 percent – measure things on a monthly basis. However, 35.36 percent aspire to measure their cross-channel marketing signals every day. “The situation is getting worse because the digital marketing space is exponentially increasing in complexity every single year,” says Yamaguchi. “There are so many channels and platforms out there sending all these varied signals that marketers are spending huge amounts of time consuming that data, and putting it into reports and spreadsheets.”

Within each channel, the number of platforms continues to grow, as well. The majority of marketers have three or fewer signals for most channels, such as display, social and email. However, 31.49 percent track four to six signals on the web and 18.78 percent track up to 10 on social. When it comes to mobile and video, nearly 30 percent don’t even know how many signals they track. 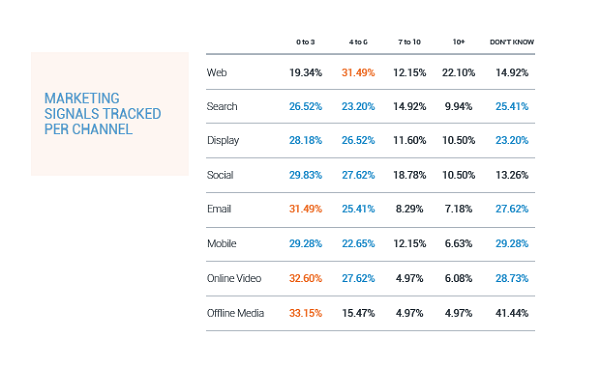 What can be done about it?

The complexity is compounded by how much time marketers are spending deciphering the various signals and campaign results. More than half of the marketers surveyed spend between two and five hours doing this each week. Yamaguchi doesn’t think that’s enough.

“The major problem that’s causing this signal lag is the fact that collecting all the signals and putting them in Excel is being done manually. We believe that marketers need to automate as much of that as possible,” he says.

Alison Lohse, co-founder and chief operating officer at Conversion Logic, agrees that greater automation could help marketers measure their data more effectively. Another tactic they can employ, she adds, is thinking about measurement earlier.

She thinks seeing, and having to comb through, all the data at once is the really overwhelming part. She compares measuring marketing channels to plumbing.

“It’s almost like when you move into a house and you have retrofit versus being able to architect fit. How does the information flow?” asks Lohse. “Even if you’re wading into the data, instead of solving each individual pipe, it’s better to take two steps back and build a schematic.” Looking at your data from two steps back, Lohse points out how important it is to make sure you’re measuring the right data. She thinks too many marketers overwhelm themselves by not having enough focus, particularly when it comes to mobile.

“Sometimes data can introduce questions; it’s almost like finding a problem you didn’t know you had,” she says. “Just because something raises a question doesn’t mean you should answer it. Think about the marketing question. I think a lot of people struggle with how data serves their business, not how they serve the data.”

View article
Seven of the biggest industry stats of 2015

Ad Industry Metrics Seven of the biggest industry stats of 2015

Here's a roundup of important industry stats in 2015, ranging from ad spend to video to social media marketing. Read More...

According to a new study by the CMO Council, content marketing is on the rise - but less than half of B2B marketers think their strategies are at leas...

View article
Marketing and Sales to Merge in 3 Years

Ad Industry Metrics Marketing and Sales to Merge in 3 Years

Marketing and Sales to Merge in 3 Years

A recent study by Marketo and The Economist found that the majority of marketers feel their positions will encompass sales in the near future. Read Mo...

A new study by the IAB shows that the majority of marketers are using many different tools to analyze data, and most feel that harmony between toolset...

The trade body says in its new statement that it’s "unreasonable" to achieve 100 percent viewability due to the limitations of current technology. So ...