When Twitter launched its Flight School last summer, it was aimed to educate agencies about using the platform to its full potential. Flight School has been completed by nearly 15,000 marketers, with early alums from Starcom MediaVest and Omnicom gave Flight School giving the course top marks.

As a result, Twitter opened made Flight School widely available last month. ClickZ attended and ever the star students, we took copious notes. Here are our thoughts, broken down by each of the course’s five sections.

Have you ever been to a conference where the keynote speaker was someone from a huge brand? And you’re all excited to see what they have to say, only to discover that most of their presentation is about why their brand is so great? And you’re like, “I know. That’s why I came here to listen to you?”

The first part of Flight School – Twitter 101 – is kind of like that. It’s all about why Twitter is awesome, backed up by 1 million case studies. The fact that you’re attending Flight School in the first place shows that you understand the platform’s value, so it’s kind of overkill.

Just skip this part. You have to answer a few questions to advance to the next section, but unless you’re a total idiot, you’ll get them right. Part two of Flight School was centered on “Glide,” an acronym for goals, listening, inspire, development and execution. This section was much more helpful, with each of those points explained in more detail.

They were also illustrated with case studies, just like the previous section. However, because Part 2 of Flight School is more tactical and less abstract, they came off as more helpful and less self-congratulatory.

For example, “Listening” focused on different kinds of moments, such as personal and cultural. For the former, PayPal targeted people tweeting about coffee, thinking coffee shop customers would be inclined to try its mobile wallet.

An example of a cultural moment was the royal baby’s birthday, which Volkswagen used to promote the safety of its vehicles. Best takeaway from Ultimate Guide to Content Planning: Just because tweets can be 140 characters doesn’t mean they have to be. The best-performing tweets have between 50 and 100 characters.

Part 3 is very helpful to any marketer learning the ropes of Twitter. It was all about the different campaigns and pricing models.

There are follower campaigns, where marketers have promoted accounts and pay Twitter when they get new followers; cost-per-click models based on website clicks; and engagement campaigns around things like retweets and likes.

Other options include app installs (more than three-quarters of Twitter users access the platform on their phones) and video views. Internal data found that native video performs better on Twitter than that shared from third parties. Like Facebook, the platform considers a view to be three seconds, provided the video is 100 percent in view.

Best takeaway from Objective-Based Campaigns: Getting followers is step one. Users who follow a business on Twitter are 47 percent more likely to visit its website. Six Flags Magic Mountain saw a 250 percent increase in web site visits and a 300 percent increase in ROI after using Twitter to promote a flash sale. 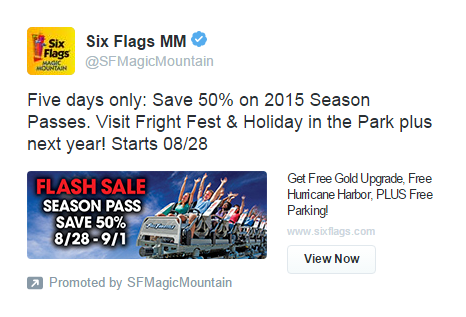 This section was similar to Parts 2 and 3, in that it was mostly a breakdown of your marketing options.  And when it comes to targeting, there are a lot of options.

You can reach users by location (from country all the way down to zip code), gender, language, devices used, interests, who they’re following (Australian ESPN reached fans of American football based on locals who follow the NFL), what they tweet about (a brand like Starbucks may target people who use words like “coffee” and “caffeine”) and favorite TV shows.

A significant portion of the population tweets about the shows they watch, which is why the Irish tourism board promoted Game of Thrones-related tweets. (The Starks’, Greyjoys’ and Tullys’ homes are all in Northern Ireland, by the way.) Best takeaway from Reaching the Right People: Your targeting doesn’t have to be limited to peoples’ Twitter activity. Integrating outside data, Butterfinger promoted a new product by  uting a Twitter campaign directed at consumers who have purchased peanut butter candy in stores.

The final segment of Flight School before graduation was more of a recap than anything else. It focused on the different things you can do with Twitter – such as launch a new product or drive traffic to your website – most of which came up earlier or kind of go without saying.

Flight School should take about an hour – although it’ll be longer if you plan to go over the entire curriculum with a fine-tooth comb to write about it. I passed with flying colors, obviously.

The course was a helpful introduction to marketing on Twitter, bookended by fluff and accolades. I’d definitely recommend attending and focusing your attention on Parts 2, 3 and 4, skipping the beginning and the end.